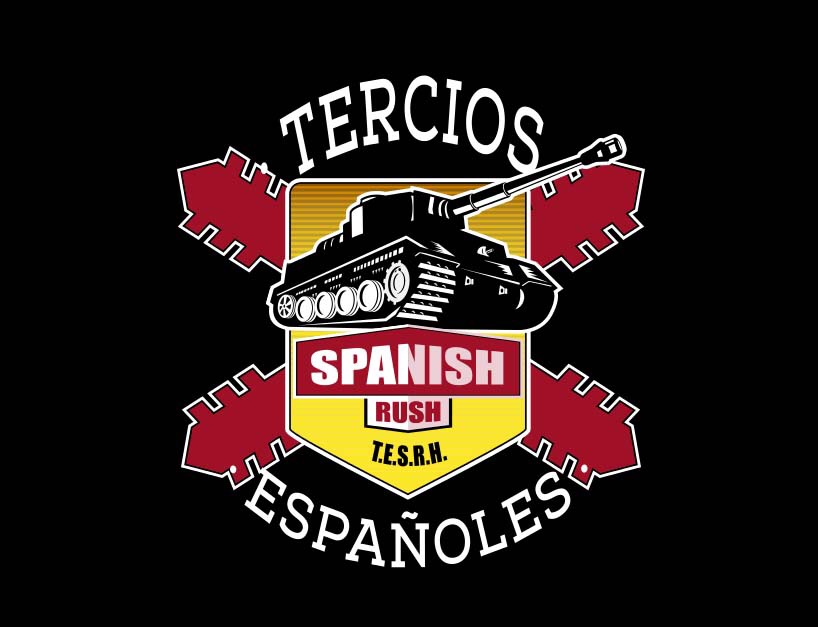 On the occasion of the third birthday of Tercios Españoles, this season we have renewed the logo. The new design has been made by Marcela Ordóñez, daughter of Elcid, who is a graphic designer and publicist. The publicist, drawing on previous designs and following the minimum requirements indicated by our government commission has renewed the lines of our main emblem using the simplified, modern design. The design can be described as minimalist and in it stands out the cross of San Andres stylized and a bit personalized on a black or white background and above all the set, a schematic Tiger I that becomes the new symbol of our clan.
We hope that the new design is to your liking and that what you proudly stress in all possible options 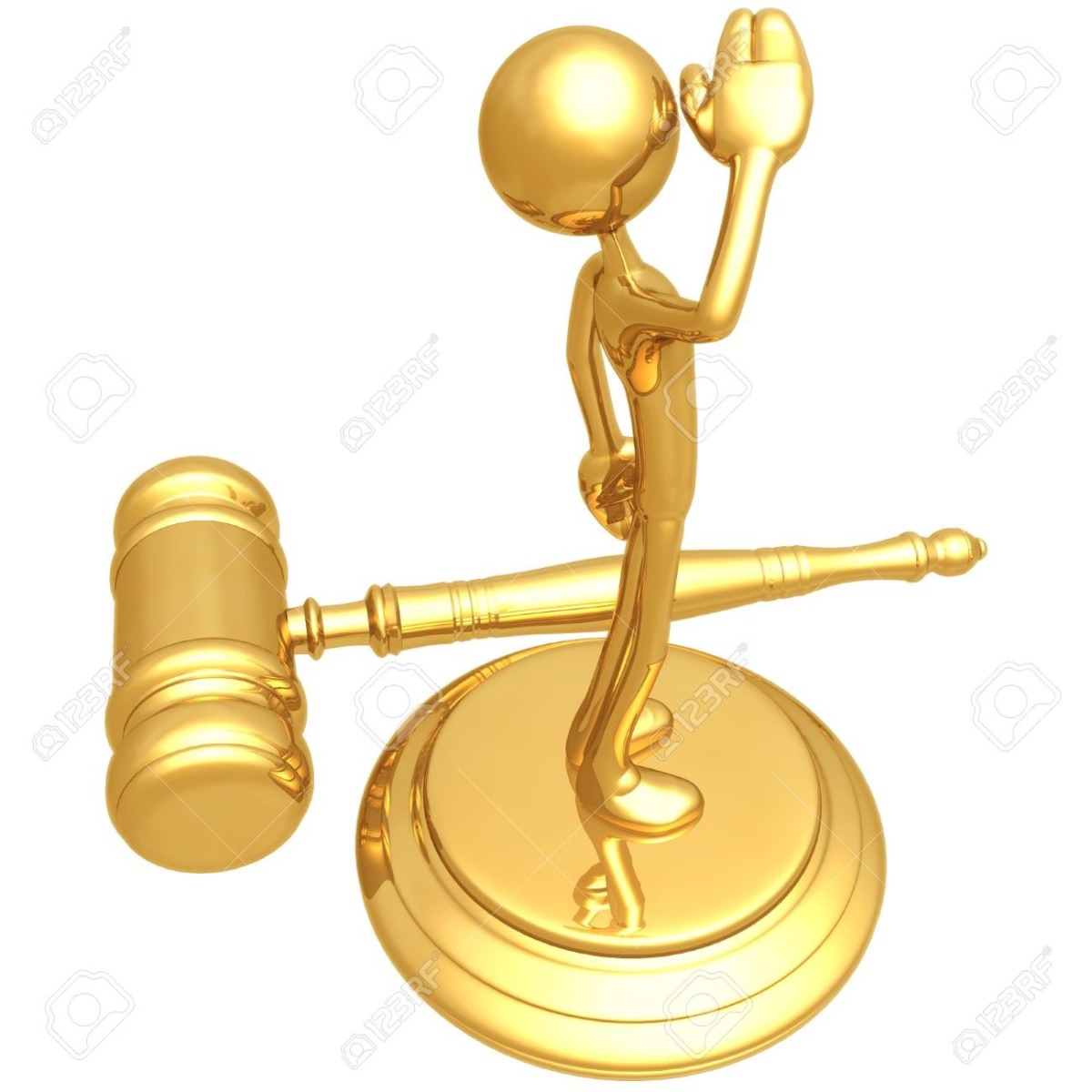 The increase in the number of Spanish clans and players of our nationality in clans gives as a consequence that we frequently meet compatriots in our team and the opposite.
Unfortunately, not all players have the same level of verbal containment, nor the same attitude of sportsmanship in the game which causes, more and more often, conflicts and exchange of insults often very unpleasant. END_OF_DOCUMENT_TOKEN_TO_BE_REPLACED 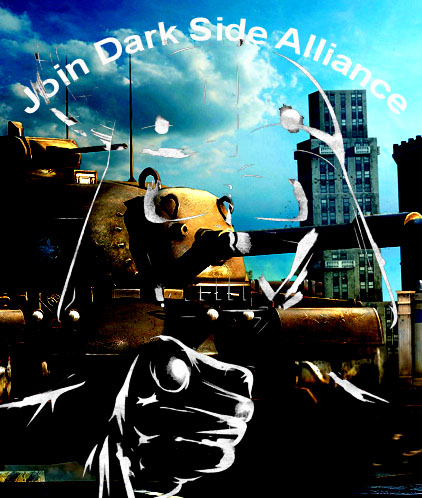 The challenge of Clan Wars is leading the best clans in Europe to join. In this line, a federation of clans willing to face new situations that arise from the implementation of Clan Wars has just been created under the denomination of “Dark Side Alliance” (DSA). Young alliance is composed by the popular clans W4R0, KRKN, LGN, RA1D, OMNI, SCRY and K4ZNA as founders clans.
The new Dark Side Alliance created with the aim of incorporating other clans to his project for which applicant clans must have some basic requirements as an average damage of 1600 points, an activity of 25 battles per day, a minimum of 59% of average WR and they will pass a test in training rooms facing Clan Wars 7 players of the founding clans. In addition, applicants must have Teamspeak3 on their devices and must be accepted by unanimous consent of the founders Clans DSA.
In order to build strong ties between clans of the Alliance, they’ll all share the newly purchased Team Speak clan server in which each of them will have their own rooms and have access to the common rooms created for this purpose. In a room where players from different clans are present simultaneously, it is mandatory the use of English.
Interest in better knowing each other has made us design a system using the training rooms in which we can share practice spaces with all the clans of the Alliance. A timetable from Monday to Thursday will be issued every Friday to entablish the matches with the other clans. The training rooms will be created including the name of the alliance such as “Dark Side Alliance – LGN vs W4RO” in the title, for example.
As a step in the integration of our clans in the goals of the Alliance, the description in the game will state that we are members of DSA. For example, the description of  Spanish clan will pray “TESRH, proud member of Dark Side Alliance”.
Dark Side Clan members, by the sole fact of being, accept a common code of conduct that includes:
– Decisions made by Dark Side Alliance must have been approved by a majority (currently 4 + 1 votes).
– Applicants will only be admitted if unanimously accepted by the founders clans.
– Excluding a clan may only be carried out with good reason, prooves and the acceptance of all the Founders Clans. Even a founder Clan may be sanctioned with expulsion and judged by a court of Founders only Clans.
– Rude attitude, bad behavior, disrespect or being accused of provocations will imply a citation on Team Speak with the victim and the leaders of both clans to resolve the situation friendly. END_OF_DOCUMENT_TOKEN_TO_BE_REPLACED 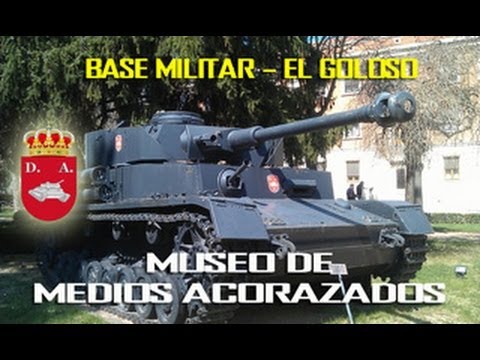 It seems like yesterday when, through the game chat, I received a mysterious message from olo_Alf_olo. My hero (who was Captain America for me by then) invited me to join the creators of a clan  and he asked me for my whatsapp. Of course, I rushed to send him my number as if the prettiest girl in the High School had told me we could meet on Saturday (and I were 17 years old). END_OF_DOCUMENT_TOKEN_TO_BE_REPLACED 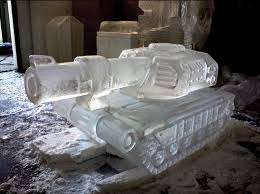 ICE Event  (Inter Clan Event) this month has already got a date. The meeting will take place within the server of Phoenix the next February 12th starting at 8 pm (CET) 7 pm (GMT) and the members of our clans, of course, are invited. END_OF_DOCUMENT_TOKEN_TO_BE_REPLACED 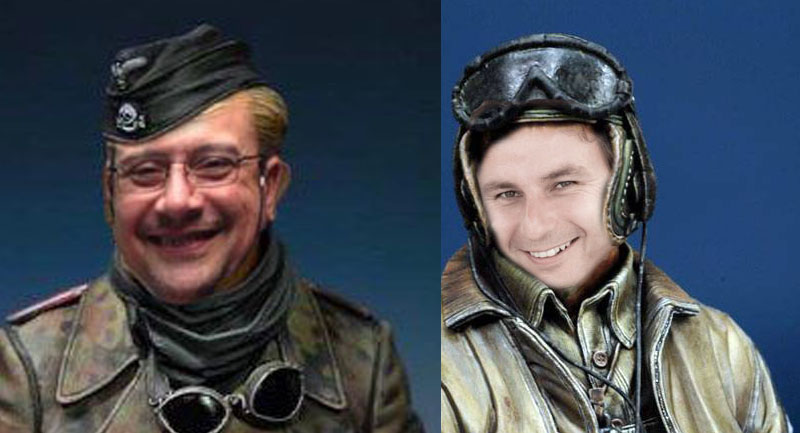 Indeed, clan members Escipionelafricanus_ps (Pere) and sverdasco (Sergio) will have from now on the role of deputy commanders of, respectively, TESR1 and ELCID.
Their essential task will be the responsability of recruitment and selection of applicants to enter the clan, to teach and help them take in their first steps in our large group of friends. END_OF_DOCUMENT_TOKEN_TO_BE_REPLACED

Well, here it is. We  found it. The Type 59 which was suppossed to be lost after December’s contest “The 12 Objetives of Blitz” has been found y the garage of a member of clan Tercios. And we didn’t know it! END_OF_DOCUMENT_TOKEN_TO_BE_REPLACED